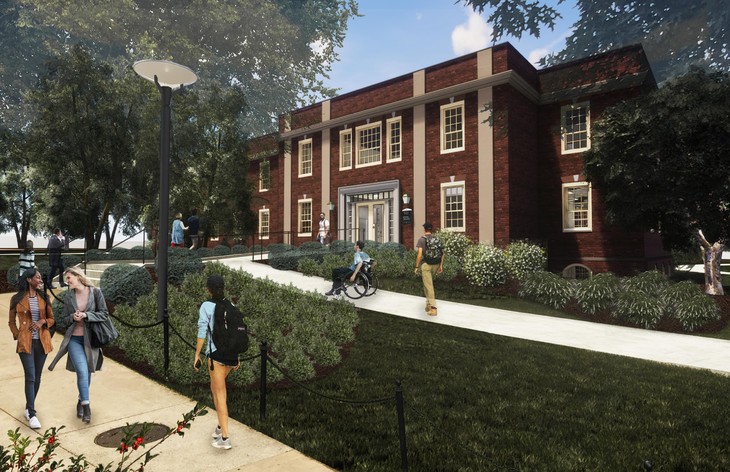 Get Started 〉 Find Your Campus

UNIVERSITY PARK, Pa. — With the official ribbon cutting slated for Nov. 15, Penn State’s student veterans will have a new place to call home at the University Park campus.

Over the past year, construction crews have been working to renovate Ritenour Building, originally built in 1929, to house the Student Veteran Center.

“The goal, the vision is that the Student Veteran Center will become the hub of activity and community for student veterans,” said Eugene McFeely, Penn State’s senior director for veteran affairs and services.

The new 6,300 square-foot center consolidates and expands services, support and activities for student veterans in a central location on campus. The $4 million center will serve as the home of the Office of Veterans Programs, which provides assistance with GI Bill® benefits, transition-to-college programs, peer-to-peer mentoring and support, and counseling resources. The Office of Veterans Affairs and Services, which provides overall leadership in the development, planning, execution and coordination of veteran programs and services across the entire University, also will be located in Ritenour Building.

The goal, the vision is that the Student Veteran Center will become the hub of activity and community for student veterans.

For McFeely, it was critical to not only create a “one-stop shop” for student veterans, but to locate it within the heart of campus.

Larson said, “The new veterans center will have an office space for student veteran organizations to meet, which is very beneficial to me as the president of the veterans organization on campus. This will be the first time all student-veteran organizations can be found under one roof and have a shared space to work together and share new ideas.”

Larson agreed, saying, “Now with the upgraded facilities and central location, we get the best of both worlds.”

More than 400 student veterans are currently enrolled at the University Park campus, with more than 5,000 at Penn State Commonwealth Campuses across the state, including World Campus.

“Even though physically located here at University Park, I envision that we’ll reach all of the campuses,” he said. “The idea is that we will use the center as a hub or magnet to pull people and resources in, and then project them out in some way, shape or form.”

For example, McFeely said a corporation may come to the center to conduct resume writing classes. The classes could be live-streamed to student veterans at the Commonwealth Campuses. Career fairs could be held virtually, with student veterans from all Penn State locations participating without having to travel to University Park.

Although the ribbon will be officially cut this week to coincide with Penn State’s Military Appreciation Week events, McFeely said work remains on a number of fronts.

He said the University has provided half of the $4 million needed to renovate the building, and donors have contributed $1.2 million toward the center, leaving about $800,000 left to be raised.

McFeely said construction is slated for completion in the spring.

“About two-thirds of the center is complete,” he said. “The other portion — the other third — which is conference rooms, the remainder of the study areas, will open up sometime in April 2020.”